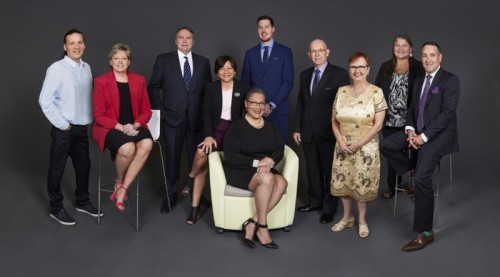 Mohawk College today announced the latest additions to its honored Alumni of Distinction. The 2019 honorees include an award-winning human rights activist, an industry trailblazer for women in skilled trades, and a distinguished Indigenous university professor.

Nora Melara-Lopez (2009) fled Honduras with her young children in 1985 after her husband, a human rights advocate and journalist, was murdered by government forces. She continued her studies after graduating from Mohawk, while working in social services and advocating for human rights and health equity. She is now an Assistant Clinical Professor (Adjunct) at McMaster University and a social worker with the Compass Community Health.

Kathy Lerette (1994) is the Senior Vice President, Business Transformation for Alectra Utilities. In her 40-year career in the energy sector, Lerette has continually broken new ground and shattered gender barriers in the industry. In addition to her professional and other volunteer roles, she is the Vice Chair of the Board for Electricity Human Resources Canada and an advisor to Canada 150 STEM Challenge: Overcoming Systemic Barriers for Women Choosing STEM Careers.

A member of the Algonquin/Mohawk, Bear Clan from the Six Nations of the Grand River Territory, Dr. Bonnie Freeman (1992) graduated from the Native Community Care: Counselling and Development – Mental Health Stream program before pursuing a decorated academic career a with a particular focus on Indigenous women and youth and community healing. She is currently an Assistant Professor in the School of Social Work at McMaster University.

Other honoured Alumni of Distinction this year include:

Profiles on the 2019 Alumni of Distinction recipients are available at: www.mohawkcollege.ca/alumni/alumni-of-distinction/2019

Tickets to the Alumni of Distinction Dinner are available at: events.eply.com/2019AOD