Businesses under pressure to make websites accessible - In the News

Businesses are under pressure to make their websites easier to use for people with visual impairments, hearing issues and other disabilities. As of January, 2021, many Ontario businesses will be required to meet a standard of accessibility that includes alternative text for images, contrast guidelines and proper labelling of content. The Accessibility for Ontarians with Disabilities Act (AODA) mandates compliance from organizations with 50 or more employees in the province, including full-time, part-time, seasonal and contract workers.

The standards adopted by Ontario – Web Content Accessibility Guidelines 2.0 Level AA – were created by the World Wide Web Consortium, an international working group led by web pioneer Tim Berners-Lee. Ontario’s law says those found guilty of an offence under AODA will be fined $50,000 a day for a person, or $100,000 a day for a corporation. 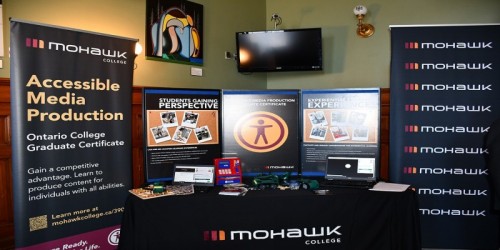 “Every director or officer of a corporation has a duty to take all reasonable care to prevent the corporation from committing an offence,” the law states.

Those fines are provided the government actually enforces the legislation, notes Jennifer Jahnke, co-ordinator and faculty in Mohawk College’s Accessible Media Production Graduate Certificate. “There are lots of standards under AODA they aren’t fully enforcing, but they aren’t as public as this one is.”

She also notes that the way the law is written is not completely clear: It states that all content published since 2012 will have to be accessible by January, but also says the rules apply to “new and significantly refreshed” sites. “It leaves it open to interpretation, but a lot of organizations are deciding it’s best to be safe.”

Only Ontario, Manitoba and Nova Scotia have thorough accessibility legislation, while British Columbia is in the process of creating such laws. Ms. Jahnke notes that despite not having an overarching law, Alberta has many regulations that take accessibility into account.

In June, the federal government passed the Accessible Canada Act, which aims to “create a barrier-free Canada through the proactive identification, removal and prevention of barriers to accessibility wherever Canadians interact with areas under federal jurisdiction.” The act mandates the development of regulations that will apply to federally regulated workplaces, such as the banking, telecommunications and transportation industries, as well as the Canadian government itself.

Avery Swartz, author of See You on the Internet: Building your small business with digital marketing, says having an accessible website is not only the “moral” thing to do to – it’s also good for business. “In Ontario alone, one in seven people has a disability ... that can impact their ability to participate in the web. That number is going to rise as the population continues to age.

“Why would you want to exclude one in seven people from being a potential customer or client?”

She recommends companies start by taking a website audit. Is the code clean, so a voice search or page-reading tool could easily distinguish between headers and body text? Is the contrast high enough for someone with colour blindness? Are the buttons large and easy to find? Sites such as the Web Accessibility Evaluation Tool, Snook.ca’s colour contrast checker and colororacle.org are good starting points, she says.

Ms. Swartz notes many small businesses use website builders such as Wordpress, Squarespace and Shopify, that “give people the ability to add the markup that is required for an accessible website, without having to know code.”

On the other end of the spectrum, “a lot of really, really large legacy organizations have giant and extremely complicated websites. Those are much harder to retroactively work on … You might be thinking more about the teardown-and-rebuild as opposed to the renovation.”

She points out that even after an initial retrofit, maintaining accessibility is continuing work; anyone charged with adding new content will have to be trained and vigilant.

Brandon Aubie, CEO of QReserve, a Hamilton-based software platform that helps organizations share and track equipment, says improving accessibility has made his company’s product easier to use for everyone, himself included. “That’s been the biggest mindset change … We look at them more like user-experience guidelines now. It has become a priority.”

He advises businesses undertaking this effort to make sure to test their improvements with actual users; a process that helped QReserve find several roadblocks they wouldn’t have otherwise identified. He adds that even though his company is too small to be affected by the 2021 deadline, many of its clients in Canada and globally are insisting on these standards.

“‘Are you accessible?’ wasn’t a question we were asked five years ago,” he said. “It is becoming more well-known that it can be done … so there is less of an excuse not to.”

Businesses under pressure to make websites accessible - In the News