Mohawk’s Distinguished Fellows make valuable contributions to the college through academic advisement and student engagement, community outreach and strategic advisement to Mohawk’s senior leadership team.  Participation in Mohawk College’s Distinguished Fellow program is by invitation only, with the title conferred and service to the college recognized during convocation ceremonies.

This year’s inductees are: 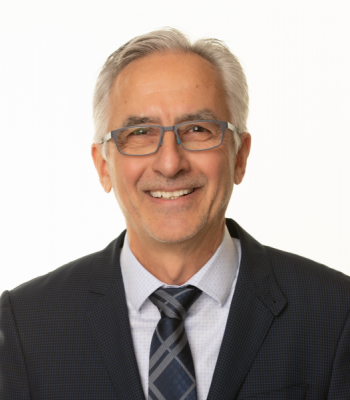 Dr. Dobranowski is a practicing Radiologist and is the Professor and Chair in the Department of Radiology at McMaster University, Hamilton. He is also the Chair of the steering and scientific committees of the recently created Juravinski Research Institute. Dr. Dobranowski is passionate about quality in patient care and provincially holds the position of Provincial Head for the Cancer Imaging Program at Ontario Health Cancer Care Ontario and the position of Provincial Clinical Lead Access to Care MRI/CT. His textbook Discover Radiology: Chest X-ray Interpretation was awarded the British Medical Association Radiology Textbook of the Year Award in 2014.

Dr. Dobranowski has been involved in several innovative projects beyond clinical care. These include working with NASA on the NASA Extreme Environment Mission Objectives (NEEMO 6 and 9). He has also participated in the creation of an MRI compatible robot for real-time breast biopsies and tumor ablation.

In 2021 Julian was honoured by the Canadian Association of Radiologists with the Distinguished Career Achievement Award.

The Distinguished Fellow - Adjunct Professor for Dr. Julian Dobranowski was conferred by virtue of hooding at the Convocation Ceremony held on Monday, June 20 at 7 p.m. 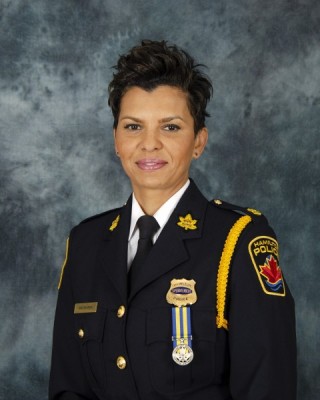 Treena MacSween grew up in Hamilton and is a proud member of the Hamilton Police Service. Treena began her career as a police officer with Peel Regional Police in 1998 before transferring to the Hamilton Police Service in 2001. In addition to serving as a uniform patrol officer, Treena has worked in criminal investigations, the public order unit and the ground search and rescue team. In 2017, Treena became the first person of colour, male or female, to be promoted to the rank of Inspector with Hamilton Police. In 2021, she was promoted to Superintendent and became the fourth woman in Hamilton Police Service history to obtain the rank. Treena is currently among the highest ranked black female officers in Canada and is one of only four black females to hold the rank of Superintendent. Treena is passionate about equity, diversity and inclusion, and she is a fierce ally of the 2S&LGBTQIA community.

A dean’s list graduate from the 1997 Law and Security Program at Mohawk College, Treena continued her education at McMaster University obtaining a diploma in Police Studies and currently studying part-time through Athabasca University.

The Distinguished Fellow  for Treena MacSween will be conferred by virtue of hooding at the Convocation Ceremony held on Tuesday, June 21 at 9:30 a.m. 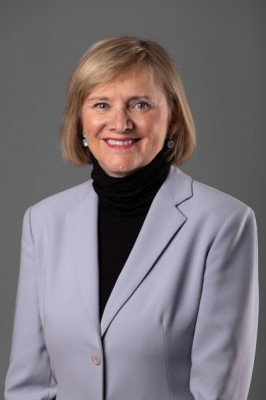 Throughout her 36 years in public service, Grace Mater has been committed to collaborative approaches that enhance the lives of children and families in Hamilton. Grace is currently a General Manager with the City of Hamilton in the City Managers Office. Under Grace’s leadership Hamilton created a community-based planning approach for children’s services that is recognized as a best practice in Ontario. She also led the modernization and expansion of childcare within Hamilton, as well as the creation of the Children and Youth Charter of Rights, which is recognized by the United Nations.  Grace also led the work on Human Services Integration and Neighbourhood Development for the City of Hamilton, and recently participated on Mohawk’s Challenge 2025 Stewardship Committee.

A graduate of the Social Service Worker program at Grant McEwan College, Grace was named a YWCA Woman of Distinction in Community Leadership in 2018, and this year, she was awarded the Lifetime Achievement Award by the Ontario Municipal Social Services Association.

The Distinguished Fellow  for Grace Mater will be conferred by virtue of hooding at the Convocation Ceremony held on Wednesday, June 22 at 9:30 a.m. 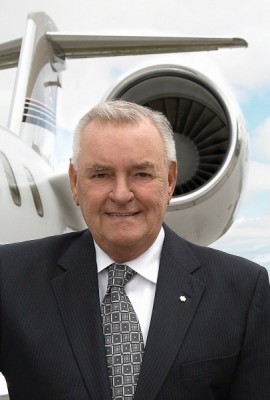 Ronald V. Joyce is known as one of Canada’s most iconic entrepreneurs and philanthropists. As a 16-year old looking for work and excitement in the big city, Ron came to Hamilton, Ontario where he served as a police officer and then a wireless operator in the Royal Canadian Navy during the Korean War. In 1967, he invested in the first Tim Hortons donut shop and transformed the business into one of the most successful food service chains in the world.

Through the Joyce Family Foundation, Ron created a $1.5 million tuition bursary award at Mohawk to support students facing financial difficulty. Then in 2016, the Foundation contributed $5 million towards a state-of-the-art building, The Joyce Centre for Partnership and Innovation, which is Hamilton’s first and Canada’s largest zero carbon institutional building.

Ron has received numerous awards and honors for his entrepreneurial success and unwavering philanthropic work: The Order of Canada honouring his dedication to underprivileged children and youth, the Canadian Business Hall of Fame, Entrepreneur of the Year for Ontario and Canada, the Gary Wright Humanitarian Award in recognition of his outstanding contributions to the betterment of community life, the Red Cross Humanitarian of the Year Award, and several awards as Philanthropist of the Year.

The Distinguished Fellow  for Ronald Joyce will be conferred posthumously at the Convocation Ceremony held on Wednesday, June 22 at 2 p.m. 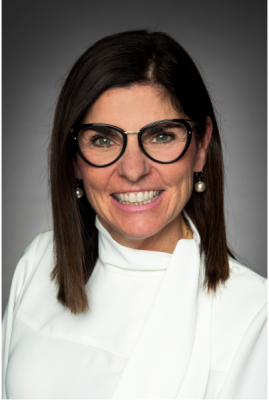 The Honourable Filomena Tassi is the Member of Parliament for the riding of Hamilton West-Ancaster-Dundas. She is currently the Minister of Public Services and Procurement, and served previously as Minister of Labour and Minister of Seniors. She was first elected to parliament in 2015. As a Member of Parliament, Filomena has been a strong champion of Mohawk College, actively supporting the college within the community and singing the praises of initiatives such as City School. She has arranged roundtable discussions with key ministers, and she has brought many ministers to Mohawk College to showcase the work of the college and raise awareness about the importance of colleges like Mohawk among policy-makers in Ottawa. Filomena’s ongoing guidance and support for college programs and initiatives has been key to the development of successful partnerships and new funding opportunities.

The Distinguished Fellow  for The  Honourable Filomena Tassi will be conferred by virtue of hooding at the Convocation Ceremony held on Thursday, June 23 at 9:30 a.m. 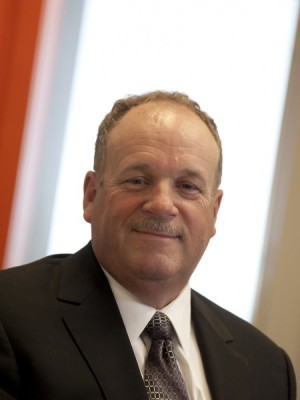 Sean Donnelly retired from ArcelorMittal Dofasco in 2021 as President and CEO. Throughout his 40-year career with Dofasco, Sean held several senior positions in the Technology, Manufacturing and Commercial areas of the company. He also served on the global Management Committee of ArcelorMittal.

Sean has served on several boards of steel industry associations including Chair of the Canadian Steel Producers Association and Director of the American Iron and Steel Institute. He also served as a member of McMaster University’s Board of Governors for seven years and is currently on the Board of Directors for Alectra Utilities. In 2015, Sean received the L.W. Shemilt Distinguished Alumni award from McMaster University’s Faculty of Engineering.

Sean holds a B. Engineering (Metallurgical) from McMaster University.

The Distinguished Fellow  for Sean Donnelly will be conferred by virtue of hooding at the Convocation Ceremony held on Thursday, June 23 at 2 p.m. 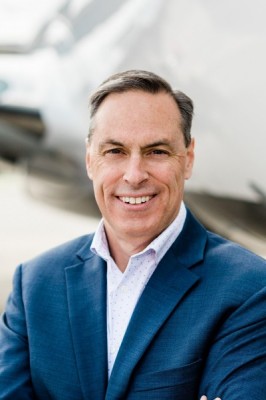 Grant Stevens is the Chief Corporate Services Officer with KF Aerospace, a leading Canadian aerospace company with over 1,000 staff that competes globally in aircraft maintenance and engineering, military pilot training, aircraft leasing, passengers and cargo flying.  As part of the Senior Executive team, Grant leads all business support functions at KF including Finance, Human Resources, Payroll, Networking & Applications, Facilities, Marketing & Communications, and Training.  His intense business knowledge, developed over 17 years at KF, has allowed him to lead the organization through the COVID pandemic, a major business re-alignment, develop training partnerships, grow facilities, and implement innovative staffing solutions. Grant sits on the board of the Canadian Council for Aviation and Aerospace.

The Distinguished Fellow  for Grant Stevens will be conferred by virtue of hooding at the Convocation Ceremony held on Friday, June 24 at 9:30 a.m. 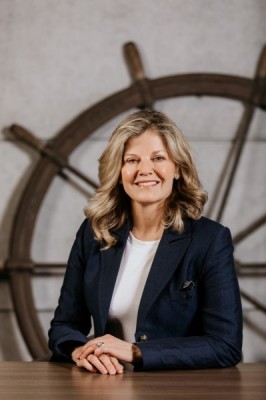 Kathy McKeil is the Chief of Staff for Breakwater Financial. With more than 30 years experience in event planning, marketing and corporate communications, Kathy has a proven track record of developing and executing successful campaigns and programs that drive business and enhance workplace culture. A natural people person, Kathy excels at connecting people and opportunities. A passionate philanthropist, Kathy is Chair of the McKeil Family Foundation, a long-standing board member of Swim Drink Fish Canada and co-founder of SEED HHN.

Kathy and her husband have been strong supporters of Mohawk College for many years, offering advice to future entrepreneurs, organizing informative guest lectures, hiring graduates, and even supporting Christmas toy drives. Mohawk’s McKeil School of Business is named in honour of a donation that McKeil Marine, made to the college’s Fennell Campus Renewal campaign in 2011, and in 2021, the McKeils presented the last of a series of special $5,000 scholarships that were given out to six deserving students each year, for five years.

The Distinguished Fellow  for Kathy McKeil will be conferred by virtue of hooding at the Convocation Ceremony held on Friday, June 24 at 2 p.m.

All Mohawk College Convocation ceremonies will be streamed live to the college's YouTube channel. To watch a ceremony, visit:  https://youtube.com/playlist?list=PLi2Gw3UkTqRhL8P95pUCajlj7vUs1JFYG