Everyday Heroes for May 2018 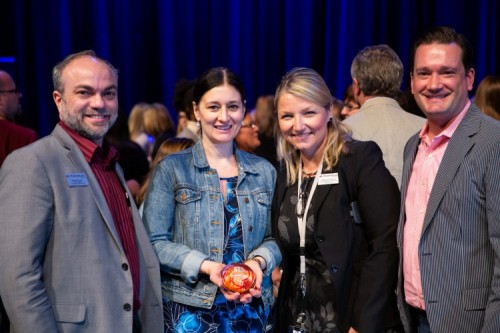 For helping families in need, Lina Bombardieri is a Mohawk College Everyday Hero. Lina joined Mohawk in 2014 as the Manager of Enrolment Services and Systems and currently serves as Manager of Registration and Scheduling. Every year, Lina, her sons and two children organize and host an annual Christmas Dinner and Comedy Show in support of the McMaster Children’s Hospital. More than 400 family and friends attend the annual fundraiser. Last year, Lina and her family raised over $15,000 in support of a new play area for the hospital’s Child and Youth Mental Health Program. To date, they have raised more than $50,000 and donated hundreds of toys for children at the hospital. Lina was presented with her Everyday Hero Award during Mohawk’s 2018 town hall by Vice President Student and Alumni Services Wayne Poirier (left), Director of Enrolment Services and Systems Deborah Calarco and Registrar Fred Nickner. Recognize someone who's making a difference at Mohawk with an Everyday Hero Award at www.mohawkcollege.ca/everydayhero. 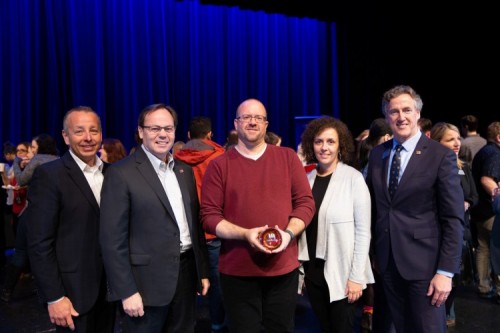 For creating a learning environment where Deaf adults thrive, Patrick Cross is a Mohawk College Everyday Hero. Patrick has been a professor with Mohawk’s tuition-free Academic Upgrading – Deaf Empowerment Program for more than 17 years. As Academic Coordinator, Patrick is recognized for bringing a deep understanding and appreciation for the challenges his students face as they return to school to further their education and pursue their career goals. Patrick helps Deaf adults upgrade their math, reading and writing skills, along with basic computer and employability skills. Patrick was presented with his Everyday Hero Award at Mohawk’s 2018 town hall by (from left) VP Paul Armstrong, President Ron McKerlie, Associate Dean Emily Ecker and Dean Jim Vanderveken. Recognize someone who's making a difference at Mohawk with an Everyday Hero Award at www.mohawkcollege.ca/everydayhero. 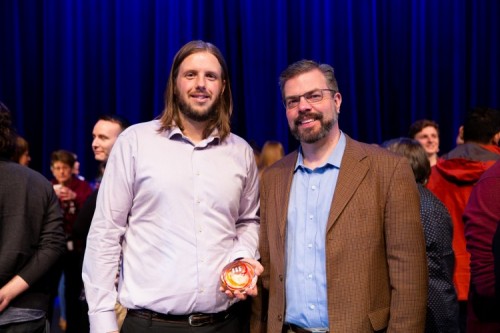 For keeping Mohawk's information technology systems up and running and college data safe and secure, Andrew Frank is an Everyday Hero. As a student, Andrew did two co-op work terms at Mohawk in 2003 and 2004 and was hired full-time in 2006. Andrew currently serves as Manager of IT Security in the college’s Information Technology Division and has worked as a Helpdesk Technician, Server System Administrator and Information Security Officer. Andrew is recognized for consistently providing expert advice and sound guidance on strategic IT-related initiatives. Andrew was presented with his Everyday Hero Award during Mohawk’s 2018 town hall by Acting VP Corporate Services Tom Ferns (right). Recognize someone who's making a difference at Mohawk with an Everyday Hero Award at www.mohawkcollege.ca/everydayhero. 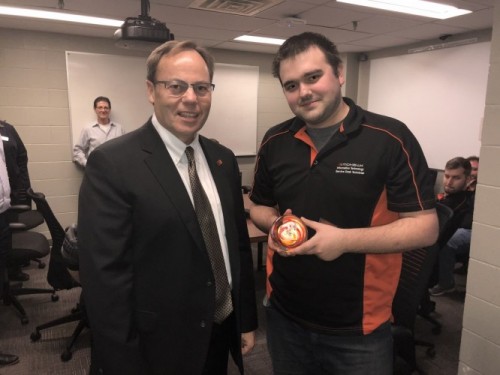 For saving a year’s worth of college photos and videos, Stefan Petkov is a Mohawk Everyday Hero. Stefan, an Information Technology Service Desk Technician, spent three weeks going above and beyond his regular duties to painstakingly salvage files from a failing external storage drive used by Public Affairs. Without Stefan’s help, the files would’ve been permanently lost. A 2013 graduate from Mohawk, Stefan deals with urgent classroom-related technology issues, does on-call technical support during off-hours and provides backup support to the executive group. Stefan consistently provides fast and professional service in resolving hardware and software issues throughout the college. Mohawk College President Ron McKerlie (left) presented Stefan with his award during a department meeting. Recognize someone who's making a difference at Mohawk with an Everyday Hero Award at www.mohawkcollege.ca/everydayhero. 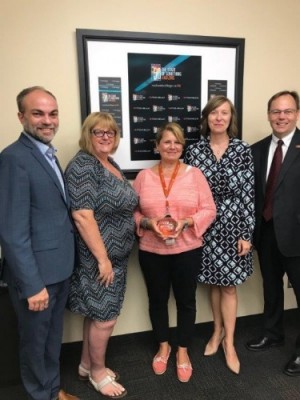 For her commitment to providing outstanding customer service and for the support and dedication she shows her colleagues, Maggie Tsafaridis is a Mohawk College Everyday Hero. Maggie is a go-to-person for staff. Her knowledge of the Registrar’s Office and understanding of the processes involved provide her with a wealth of information which she willingness shares with her team. Maggie supports her coworkers who may be experiencing challenging situations and helps bring resolution to students who are unsure of processes, systems or policies. Maggie is always willing to help from assisting at Open House, helping to onboard new staff or assisting other departments. At Convocation Ceremonies, her calm and supportive demeanour is an asset as she coordinates the ushers, calms the nerves of the graduates, and ensures the guests experience a wonderful ceremony. Recognize someone who's making a difference at Mohawk with an Everyday Hero Award at www.mohawkcollege.ca/everydayhero.

Everyday Heroes for May 2018