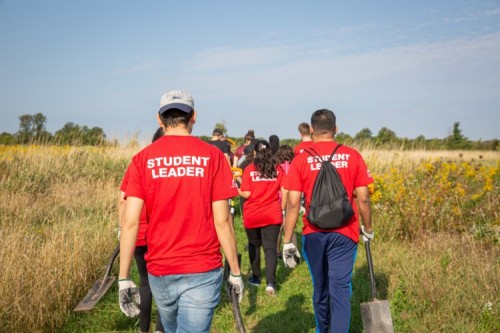 Mohawk College students rolled up their sleeves to help Friends of the Eramosa Karst plant trees and update its website and branding through the Campus to Community initiative.

Campus to Community, an initiative of the Student Life department, launched in 2016 and has grown to include 18 partner organizations. The goal is to create meaningful connections between Mohawk students and the Greater Hamilton Community through volunteer outreach projects.

Friends of the Eramosa Karst was one of six new community groups to establish a partnership with Mohawk in 2019.

“We are always working closely with our community and neighbours, so when we heard Mohawk College was looking for community partners, we thought it was a great fit for us,” said the organization’s chair Margaret Reid.

The volunteer group undertakes many public outreach initiatives, along with planting events to bring the ecologically sensitive and important karst back to its natural state.

Reid says about 20 Mohawk students came ready to work hard at a fall 2019 planting event during which 300 trees were planted.

“They did a fantastic job. They were so prepared and enthusiastic. It was definitely a positive experience.”

A few students had planting experience and they were assigned to groups to teach those who didn’t know, says Campus to Community student lead Dhruvi Shah.

“Everybody felt a great sense of accomplishment after we were done,” she said.

The goal is to build a buffer of trees to shelter the karst from Rymal Road and to separate the conservation area from homes.

Karsts are geological formations found in limestone that include underground drainage, caves and passages. The Eramosa Karst in the Niagara Escarpment was designated an Area of Natural and Scientific Interest by the Ontario Ministry of Natural Resources in 2003. It is believed to have the largest number of unique karst features in any single area in the province.

The lands, which are owned by the Hamilton Conservation Authority, includes a number of provincially significant features, including soil pipes, a high concentration of sinkholes and sinking streams, overflow sinks, dry valleys, a natural amphitheatre, and a 335 metre-long cave (the 10th-longest in Ontario). There is also a natural dolomitic limestone bridge at the entrance of one of the sinkholes.

The surface and groundwater drainage system that created the karst originated about 13,000 years ago, after the last glacier retreated.

There is a lot of work to be done to bring the karst back to its natural state, says Reid, including cleaning up caves and removing weeds that are choking waterways. Over the centuries, caves and sinkholes have been filled with rocks by farmers who tended the acreage. They now need to be removed.

“The real goal is to bring this area back to its natural state,” said Reid.

Mohawk students have also pitched in on an update to the branding and logo for Friends of Eramosa Karst, and the group is hoping for help with its website, too.

“It’s certainly helpful for us. We are all volunteer based. It’s a win for us and a win for the students, who get some experience,” said Reid.

“It’s great that we can help them get real-world experience.”

Reid hopes that the partnership with Campus to Community may result in some dedicated new volunteers for Friends of the Eramosa Karst.

“This program shows what can be done when the community pulls together.”

Shah, who will begin her final year studying chemical engineering in September, has served as a student lead for two years, previously working with partners Mission Services of Hamilton and Stewards of Cootes Watershed.

“I really love it. I keep meeting new people and learning new things. Other jobs aren’t like that. I’m always getting to do something new.”

That includes finding ways to engage new students and encourage them to give back to the community.

“I can influence other people to come with me and do something good.”