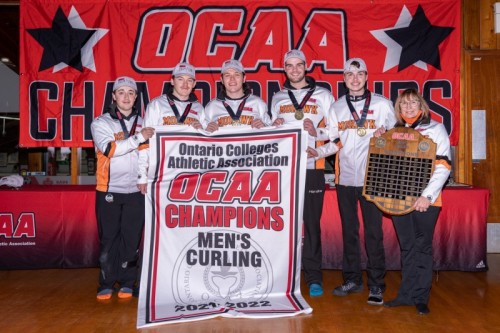 A few new championship banners will be raised inside the David Braley Athletic and Recreation Centre after the Mohawk Mountaineers curling program captured double gold at the OCAA Championships in Sault Ste. Marie.

The Mountaineers men’s team won provincial gold for the first time in 24 years, last winning in 1998. Mohawk defeated the Humber Hawks 5-4 in the gold medal match after going 3-2 in round robin play and narrowly beating the Confederation Thunder Hawks in the semi-finals.

In other sports, women’s volleyball continues to be ranked sixth in the CCAA National Rankings and men’s volleyball moved up two spots this week in their respective rankings to number 12.

Women’s basketball split their two games, while first-year Celina Chung was impressive with a combined 21 points and 30 rebounds this past week. Men’s basketball lost their lone game to Niagara.

Feb. 27: Women’s and men’s basketball travel to London to play the Fanshawe Falcons at 1 p.m. and 3 p.m.

Mar. 2: Both basketball teams play host to the Conestoga Condors at 6 p.m. (W) and 8 p.m. (M) – note this will be seniors night (a night to celebrate graduating student-athletes)

Please note that no spectators will be permitted inside the DBARC at this time; however, an updated spectator policy could be released soon. All games will be streamed online via the OCAA Live platform.