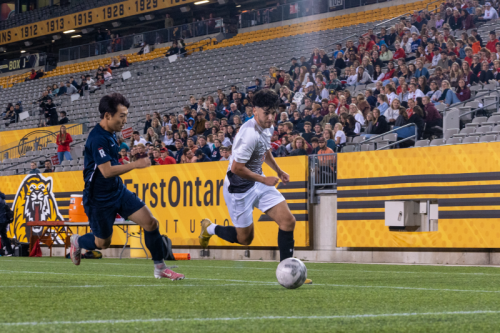 Women’s soccer had an impressive opening weekend winning their first game 3-2 versus the St. Clair Saints, a team the Mountaineers a year ago lost to in the OCAA playoffs. Mohawk would tie both Lambton and Redeemer to begin the season 1-0-2, and at the time of this publication sit first place in the OCAA West division.

The Mountaineers men’s soccer is off to a slow start after two tough road games and falling to cross-city rivals the Redeemer Royals at Tim Hortons Field.

On the diamond, the Mohawk women’s softball team is slowly finding their offense. Through six games the Mountaineers have only one once, but over the course of the last four they have scored a total of 29 runs.

Janelle Lammers (women’s soccer): Just 8 minutes into the 2022 season, Lammers put up a highlight goal for the Mountaineers which helped carry momentum to a win. A second-year midfielder, Lammers’ will be a key leader for Mohawk this season.

Ian Kere (men’s soccer):  Kere scored a goal in the Mountaineers match versus the Lambton Lions. The third-year midfielder will also be a key veteran leader for Mohawk during the 2022 season.

Sept. 17: Women’s softball host doubleheader action at Mohawk Sports Park versus the Lambton Lions with game one at 12 p.m. and game two immediately after at 2 p.m.

Sept. 21: Women’s softball travel to the play the Seneca Sting in another doubleheader. Games begin at 6 p.m. and 8 p.m.