The Mohawk Mountaineers women’s soccer team made a big statement this past week that has put the OCAA on full alert. 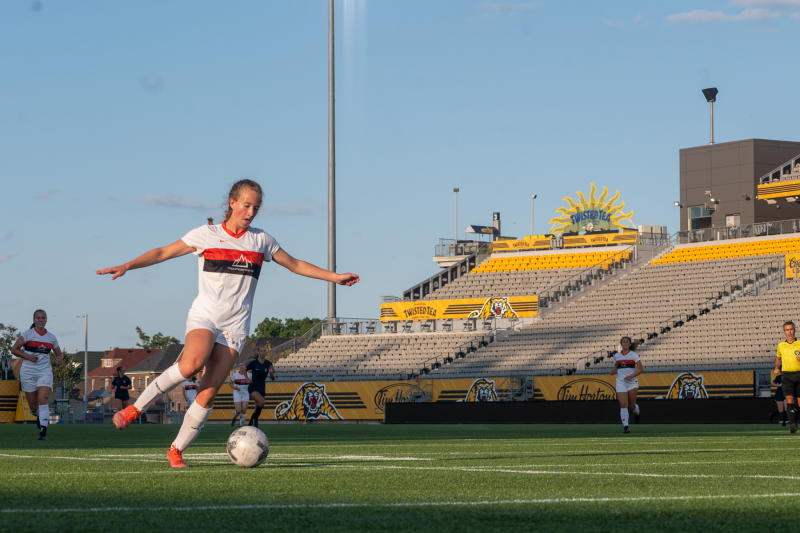 On Wednesday night, the Mountaineers travelled to play the Humber Hawks, the fourth-ranked team in the country. After falling behind 1-0 only five minutes into the match, the Mountaineers continued to battle and eventually tied the match 1-1 in the 86th minute, thanks to first-year Alyssa Glasbergen.

The eventual tie meant Mohawk have received a point in all four games so far this season and hold a 1-0-3 record.

The men’s soccer team struggled against the Hawks, who came into the match ranked first in the nation. The Mountaineers lost 7-0.

Women’s softball also had a tough week losing all four of their games.

Mountaineers Athlete of the Week

(in partnership with the Mohawk Students’ Association)

Martin (Six Nations) is a first-year infielder for the Mountaineers and showed off her impressive defensive skills in three games. Offensively, Martin had a .600 batting average, scored four times, and added three RBI's and three stolen bases

Sept. 23: Women’s and men’s soccer are back at Tim Hortons Field to host the Niagara Knights. The women’s game will begin at 4 p.m. and men’s game at 6 p.m. Entry for spectators is free.

Sept. 23: Mountaineers cross country will participate in their first race of the year as they had to King City for the Seneca Invitational.

Sept. 24: Women’s softball will host the St. Clair Saints at Mohawk Sports Park. Game one begins at 12 p.m. and the second will follow at 2 p.m.

Sept. 25: Women’s softball will finish up a busy week with road games versus the Fanshawe Falcons. Games will also begin at 12 p.m. and 2 p.m.

Student Services - Here to help - December 2, 2022
Mountaineer varsity highlights - December 2
Lottery Winner - December 2, 2022
Leaders Spotlight on Learning - December
How will you take action during the #16DaysofActivism?
Chris Hadfield speaks at Mohawk College - In the news
Some modules are disabled because cookies are declined. Accept cookies to experience the full functionality of this page.
ACCEPT COOKIES
We use cookies to optimize the website, no personal information is stored. Learn more
DECLINE COOKIES ACCEPT COOKIES