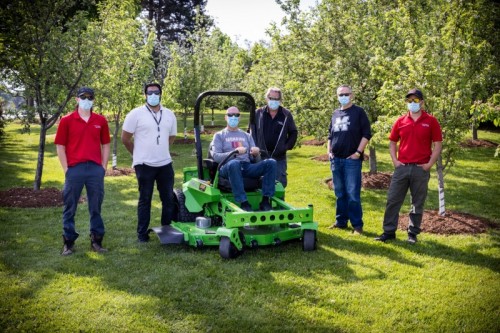 Mohawk College has added an electric riding lawn mower to its landscaping fleet! The Mean Green Mower is the college’s first electric lawnmower, representing another step taken by the college to reduce greenhouse gas (GHG) emissions.

Did you know that operating a gas-powered 24 horsepower (hp) riding mower for 1-hour releases as many emissions as driving a car over 7700km! That’s a lot of emissions that will no longer be added to the planet’s atmosphere.

Mohawk has made significant progress in reducing its GHG emissions; since 2007, the college has reduced its emissions from buildings and operational by 63%. However, there are many other benefits associated with using an electric mower instead of a gas powered one, including reduction of noise pollution, improved air quality and cost savings on fuel and maintenance. Let’s explore how these reductions improve the environment:

Noise Pollution: Loud noises of over 85 decibels (dB) can cause hearing damage. Typical gas mowers can reach between 95-100 dBs while in use, but the Mean Green Mower doesn’t go above 80 dBs. Running the quieter machine equates to potentially less damage to the users hearing and an overall reduction in noise pollution on campus.

Improved Air Quality: Small engines, such as the ones in gas mowers, can release volatile organic compounds (VOCs) which contain harmful compounds like carbon monoxide or benzene (which is carcinogenic). Electric mowers don’t release such compounds making the experience safer for the user and for the college community.

Savings on Fuel and Maintenance: The Mean Green Mower requires little maintenance as it only needs to have its wheel bearings greased, compared to a conventional mower, which can require up to $1000 of worth of oil, lubricants and filters per season. Not to mention eliminating about 350 liters of fuel per season!

The Grounds Team will be using the Mean Green Mower all summer across the college’s grounds to put it to the test and determine if it stands up to the performance of the gas-powered mowers. Hopefully, the case can be made to secure funding to transform the fleet from gas to electric mowers as the machines require replacement.

IT Notification – Banner & Database Maintenance Upgrade
Fall 2022 start-up deadlines
IDEAWORKS Update for Faculty & Staff- May 13, 2022
Join us for a special panel on Indigenous People in the Trades
Student Services - Here to help - May 13
Mohawk launches Public Health Nursing graduate program during International Nursing Week
Some modules are disabled because cookies are declined. Accept cookies to experience the full functionality of this page.
ACCEPT COOKIES
We use cookies to optimize the website, no personal information is stored. Learn more
DECLINE COOKIES ACCEPT COOKIES